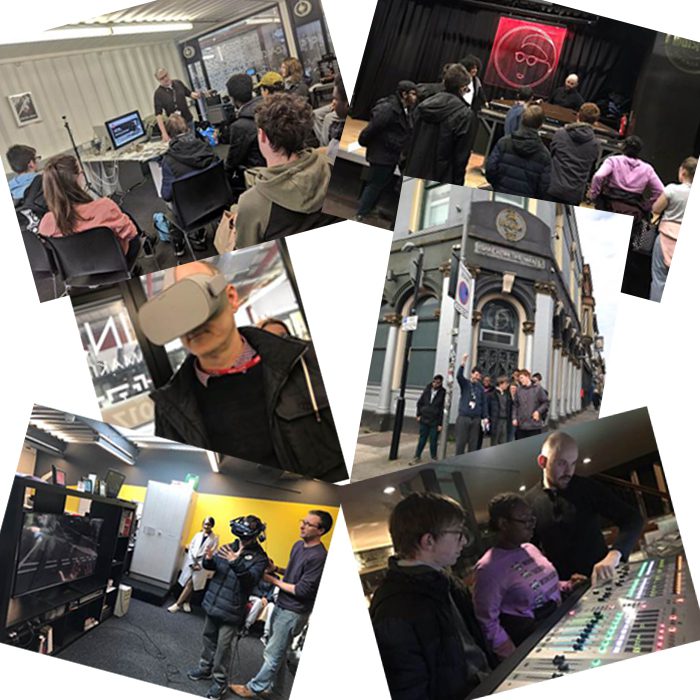 The Digital Advantage team had the opportunity to further their career aspirations in the creative digital sector by visiting The Sharp Project. The students were given a tour around the building with visits to the green screen and music studios and shown all the exciting businesses that were set up in the warehouse. They were delivered a very informative presentation that offers opportunities for young people to get involved voluntary and paid which was an exciting prospect for our budding young entrepreneurs. Later in the day the students had the opportunity to trial a VR programme that was being developed for the police to train officers in crime scene investigation. They also had the chance to try augmented reality and an educational time travelling VR programme that is also being developed.

Mr Hughes took his English group to Band on the Wall, the venue has been a cornerstone of Manchester’s thriving music and cultural landscape for the greater part of a century. Our students had the opportunity to take a tour around the facilities and ask questions that were answered by the programme and event co-ordinator Santana and the head of production John. They were extremely welcoming and detailed and the students gained a lot in terms of career information and qualifications they would need to pursue a pathway in this sector. The students were given the opportunity to use the £20,000 sound desk and lighting equipment. A thoroughly enjoyable experience was had by all and sparked excitement and inspiration for future ambitions.

Both trips were very inspiring and created a buzz of excitement on the way back to school.