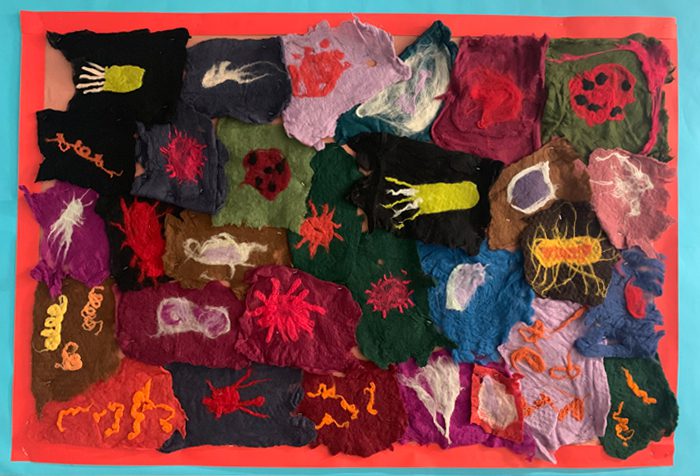 The Spring term’s Arts and Humanities topic is Medicine and Disease.

Students have learned about how diseases changed the world. How the Black Death, killed tens of millions, brought the Feudal System crashing down and ended the Middle Ages.

How measles and typhoid wiped out 90% of the population of the Americas by the time any Europeans actually thought of living there.

About how an English doctor worked out how to stop the cholera that was killing thousands in 19th Century London, and so ushered in the age of clean water and modern sewage systems we now take for granted.

The Art component of the topic involved students looking at photographs of four of the more picturesque pathogens and attempting to copy the picture in the medium of felt.

This involves layering dyed sheep’s wool that has been spread out into a gauze to form a backing mat. This is soaked in soapy water and placed between sheets of bubble wrap. There follows twenty minutes of massaging with finger tips.

This allows the natural matting properties of the wool to start forming the felt. Next more wool is carefully spread out to create the image of the germ itself. Another half hour or so of rubbing and soapy water follows, hot and cold rinses, then a spot of rolling in a bamboo place mat. A final rinse and the felt is complete. Soft, deadly and beautiful!