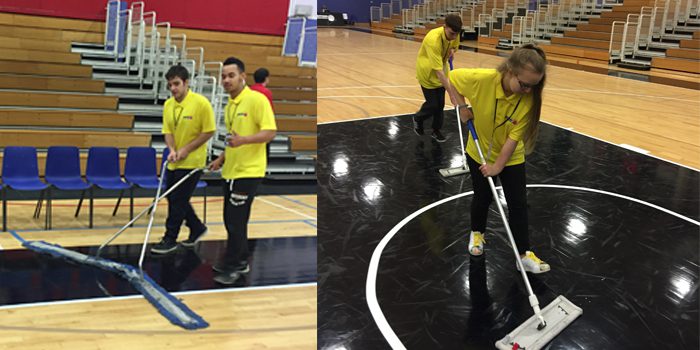 On Tuesday 24th November four Sixth Form students who participate in the Inclusive Futures volunteer programme in Manchester. They were asked to help set up a major basketball event to take place on Wednesday 25th in the evening. Derai, Shannon, Xavier and Robert jumped at the chance to help out at this exciting event.

The four pupils went on Tuesday to the Amaechi Basketball centre in Whalley Range not knowing what to expect. On arrival the four volunteers were greeted with a long list of duties for the day. To their credit they met this challenge head on and full of enthusiasm. Their duties included arranging the seating, displaying all the advertising, keeping all areas dust and litter free. Part of their reward was to witness a 2 hour training session of the GB Women’s Basketball team held behind closed doors. They were all amazed at the level of skill shown by the team and it was a real eye opener for a couple of them!

On Wednesday the volunteers shift began at 4pm. The event was GB Women v Italy Women and started at 7pm. As the crowds began to turn up our volunteers were directing them to their seats, stopping spectators during periods of ‘play’ and assisting with general enquiries. At the end of a close competitive game the GB team gave out autographs. Once again the volunteers stepped in and helped with controlling the queues.

It was a long day but thoroughly worthwhile. I would like to give a big thanks to our four volunteers who acted throughout with enthusiasm, dedication and commitment.