MELLAND PUPILS TAKE ON SHAKESPEARE’S “THE TEMPEST”…….AND NAIL IT!
Back to article list 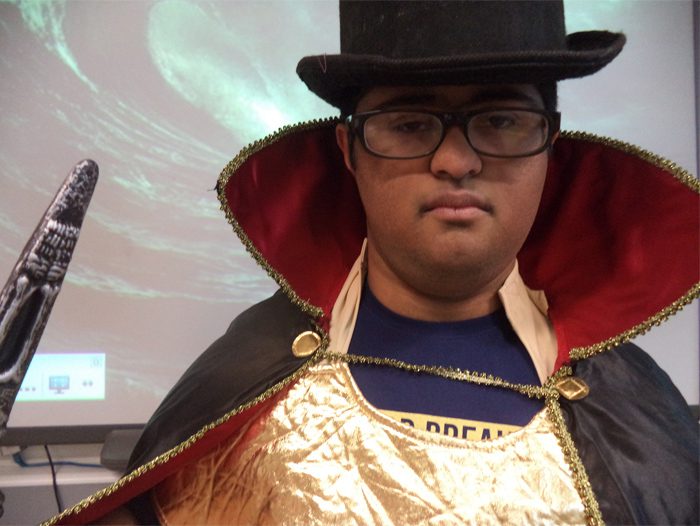 On Tuesday 12th December, at 10am, a group of Melland Drama students will be performing a musical version of Shakespeare’s “The Tempest”, complete with Christmas songs! It will be a rare chance to see the timeless words of the Bard accompanied by songs such as Slade’s Merry Christmas Everyone. The performance will star Alicia, Alexander, Chloe, Humza, Qasim, Niamh, Mohammed and Regan from the school sixth form. It will be performed for PMLD students and promises to be a fun, interactive experience.

Drama students have been working hard on this play since September. It promises to be a unique spin on Shakespeare with an emphasis on fun rather than literary accuracy! Some splendid costumes have been created for the various roles, and Melland’s take on Prospero the Wizard has to be seen to be believed! In addition, the students have developed a number of festive song and dance routines, culminating in a grand musical finale. Shakespeare has never been such fun and all involved are sure to see this as a wonderful kick start to Christmas 2017.

Drama lessons have focused on this performance throughout the term. Students have created costumes, scenery, props, models and sound effects. They have also consolidated their skills by learning lines of dialogue, song lyrics and dance routines. The show will feature sound effects such as lashing rain, thunder, lightning and a wild sea storm, with all noises created by the pupils themselves. It promises to be a fully immersive and interactive experience.